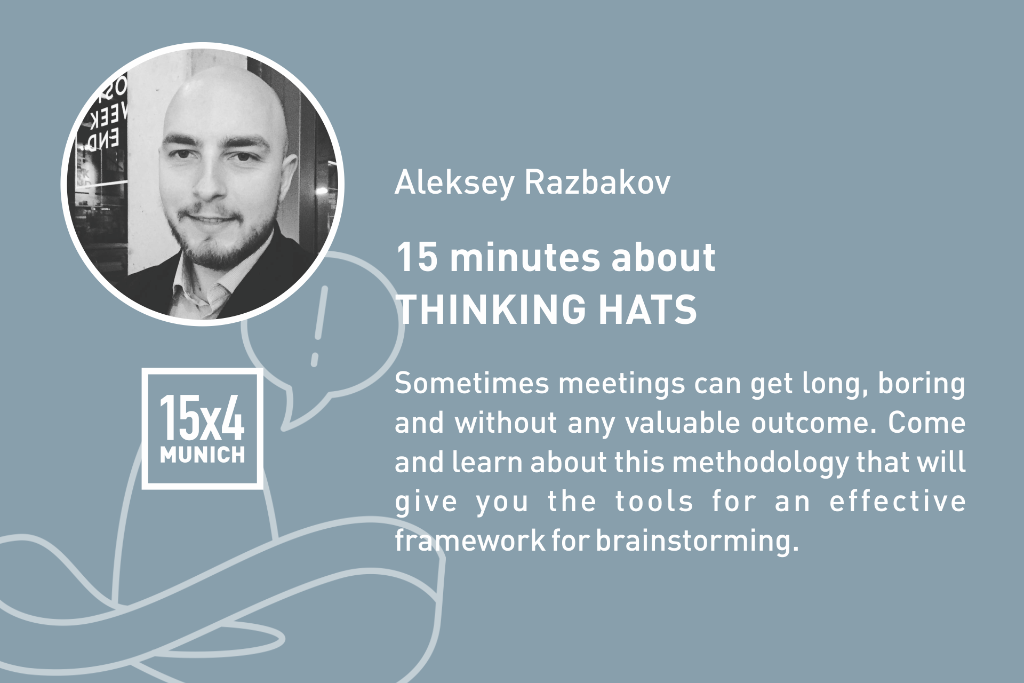 Six Thinking Hats is a system designed by Edward de Bono which describes a tool for group discussion and individual thinking involving six colored hats. "Six Thinking Hats" and the associated idea parallel thinking provide a means for groups to plan thinking processes in a detailed and cohesive way, and in doing so to think together more effectively. (Source)

This talk was presented at 15x4 Munich. Slides.

The term lateral thinking was coined by Edward De Bono. Lateral thinking is about thinking ‘out of the box’. It is about ideas that might not be obtainable by step-by-step logic. There are four critical factors linked with it.

This last factor has to do with the fact that lateral thinking involves low-probability ideas which are unlikely to occur in the normal course of events.

Example: In 2004, the organising committee for 2007’s NDP in Singapore was asked to build a stadium to hold it because the National Stadium was going to be torn down. The location was to be at Marina Bay. Most people thought that they would build a stadium. Realising that a key feature of Marina Bay was the bay and the water itself, they decided after much discussion to build the floating platform instead. This example shows us how normal people like us can get ideas unlike that of others. It shows us that anyone can think pout of the box. (Source)

# Lesson in Lateral Thinking: The Tale Of Two Pebbles

Many years ago in a small Indian village, a farmer had the misfortune of owing a large sum of money to a village moneylender. The moneylender, who was old and ugly, fancied the farmer’s beautiful daughter. So he proposed a bargain.

He said he would forgo the farmer’s debt if he could marry his daughter. Both the farmer and his daughter were horrified by the proposal. So the cunning money-lender suggested that they let providence decide the matter. He told them that he would put a black pebble and a white pebble into an empty money bag. Then the girl would have to pick one pebble from the bag.

They were standing on a pebble strewn path in the farmer’s field. As they talked, the moneylender bent over to pick up two pebbles. As he picked them up, the sharp-eyed girl noticed that he had picked up two black pebbles and put them into the bag. He then asked the girl to pick a pebble from the bag. Now, imagine that you were standing in the field. What would you have done if you were the girl? If you had to advise her, what would you have told her?

What would you recommend that the girl do?